Craftsmanship Made in Germany

In a world that spins ever faster, there is more than ever a longing for things that are made with great dedication and special care. Things that come from a real manufactory where you meet people who do what they love and love what they do.

For more than 270 years, fine manufactory porcelain has been produced in Fürstenberg in southern Lower Saxony with passion and precision. Perfection down to the last detail is only possible because even today the majority of porcelain production is based on manual work. This is still the motto at FÜRSTENBERG: A cup goes through 100 hands. Because it is the small details that reveal genuine craftsmanship and give the porcelain from FÜRSTENBERG its special value:

Double-walled vessels whose wafer-thin inner and outer walls can be assembled by hand alone; decors that converge under the handle, or gold decorations that run overboard (e.g. a cup rim) and can only be painted by hand.

Perfection down to the last detail

In many cases a product consists of several parts, which are manufactured individually and then garnished together with a steady hand. For instance, a teapot is usually made up of five elements: the body, handle and spout for the pot, and the body and knob for the lid. In fact, the large Niedersachsenross (Lower Saxony Steed) consists of no fewer than 17 garnish elements.

FÜRSTENBERG’s extremely thin body also requires so-called firing aids, which prevent the product, e.g. a cup, from warping in the oven. These firing aids are made of the same porcelain as the object itself, as they have to shrink by the same factor during firing. Therefore, the supports cannot be reused after firing. Almost every product therefore needs its own firing aid, which can then no longer be used.

But even the plaster moulds into which the liquid porcelain is poured have a limited service life. Each one needs to be replaced after about 50 uses, because the surfaces that come into contact with the casting slip or rotating mass wear away.

Insights into the Porzellanmanufaktur FÜRSTENBERG 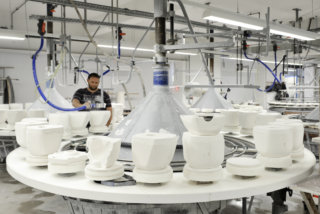 The PLISAGO side table (designer: Studio Besau-Marguerre) is made entirely of porcelain, and requires the highest level of expertise in production. 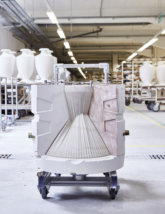 Every single teapot is prepared by hand before glazing – here by Eugen Ochs. 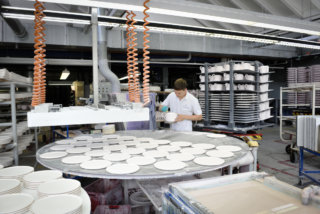 The majority of porcelain production – as with the glazing seen here – is still done by hand. Photo: Claudia Warneke 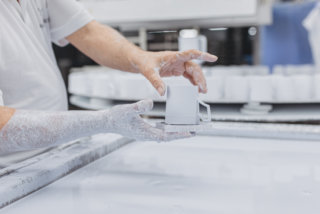 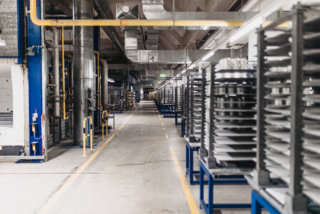 Unfired plates can be stacked up to five high on an already fired plate, and then be fired (biscuit firing) as well. | Photo: Claudia Warneke 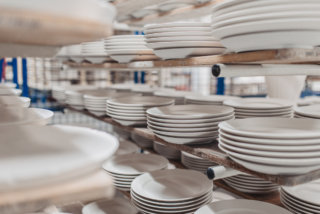 Setters are used to prevent an item such as the Niedersachsenross (Lower Saxony Steed) from warping in the furnace. | Photo: Claudia Warneke 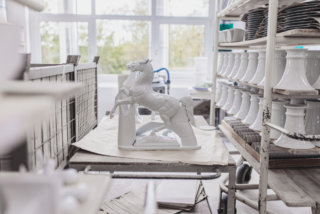 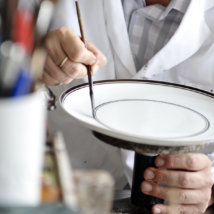 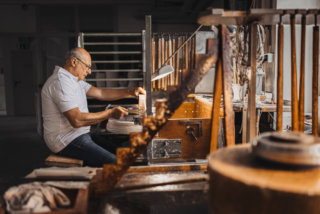 Porcelain with the crowned blue “F” is known internationally as sophisticated porcelain art with the “Made in Germany” quality seal. | Photo: Claudia Warneke 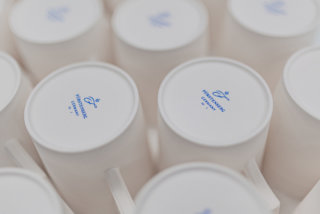 This exclusivity, with which FÜRSTENBERG creates porcelain, has been honoured with numerous design awards:

Winner of the German Design Award 2019. Together with Studio Besau-Marguerre, the porcelain manufactory developed the side table in pleated look completely made of manufactory porcelain. The extravagant design brings the elegance and sophistication of porcelain to modern living environments.

Award-winning with the reddot design award 2016. New dining culture: a dining plate, a breakfast, dessert or side plate, a bowl and a cup form the complete OMNIA service and thus the essence of modern dining culture. All four articles are matt on the outside and look like finely layered.

Winner of the iF product design award 2012. Together with top chefs Sven Elverfeld, Nils Henkel and Tim Raue and designer Mikaela Dörfel, the porcelain manufactory developed the gourmet line BLANC, which exceeds the demands of the upscale kitchen.